Or: “In rebuilding the wall, Nehemiah prefigures Godly unity in the church”. 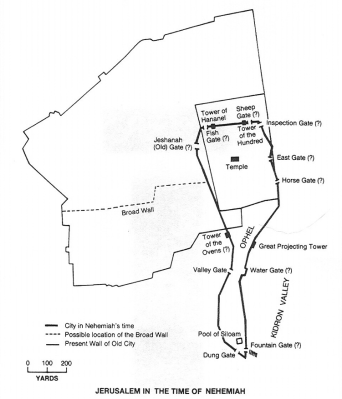 Steve Hays is amazing. Sometimes I think he is not cognizant of what it means to be a mere mortal. The other day, he posted a link to “The wit and wisdom of Evan May” (Evan is a co-blogger at Triablogue). In doing so, Steve is immediately cognizant of the whole body of work. On the other hand, I frequently need reminders, so I went in and began to read and listen, and I came upon this gem:

God unites his people for his purpose.

Unity does not mean the absence of diversity. The Father, Son, and Spirit don’t function in identical ways. Unity does not necessitate uniformity.

Evan brings this out clearly in his discussion of Nehemiah 3. Nehemiah relates that “God had put in my heart” to do something for Jerusalem, and that something was to rebuild the wall.

In doing so, God not only ordains what he desires to accomplish, but he also sets in place the means for it to be accomplished. “…we are to grow up in every way into him who is the head, into Christ, from whom the whole body, joined and held together by every joint with which it is equipped, when each part is working properly, makes the body grow so that it builds itself up in love.”

This work on the part of Nehemiah is a shadow of, a pre-figuring of, the more perfect “building of the church” in Christ:

Then I said to them, “You see the trouble we are in, how Jerusalem lies in ruins with its gates burned. Come, let us build the wall of Jerusalem, that we may no longer suffer derision.” And I told them of the hand of my God that had been upon me for good, and also of the words that the king had spoken to me. And they said, “Let us rise up and build.” So they strengthened their hands for the good work. But when Sanballat the Horonite and Tobiah the Ammonite servant and Geshem the Arab heard of it, they jeered at us and despised us and said, “What is this thing that you are doing? Are you rebelling against the king?” Then I replied to them, “The God of heaven will make us prosper, and we his servants will arise and build, but you have no portion or right or claim in Jerusalem” (Nehemiah 2:17-20).

He cites George Eldon Ladd on the prayer of Jesus for the unity of the church:

In his last prayer, Jesus looks forward to those who are to believe through the word of his immediate disciples (17:20). The burden of his prayer is for their unity: “That they may be one; even as though, father, art in me, and I in thee, that they also may be in us, so that the world may believe that thou has sent me” (17:21). These words have often been cited in support of organic church unity that finds oneness in external structures. However, such is not the primary intention of the passage. The unity of believers is analogous to the unity of the Son with the Father, and the unity of believers with both the Father and the Son. It would be possible to have a single visible church and yet have its life rent by internal strife and divisions. This unity is far deeper than organizational structure. Even as the Father and the Son are one while remaining separate persons, so the unity of the church must allow for outward distinctions. Unity is not uniformity (from George Eldon Ladd, “A Theology of the New Testament”, Grand Rapids, MI: William B. Eerdmans Publishing Company, Revised Edition © 1993, pg. 319).

The church must allow for outward distinctions. Unity is not uniformity.

The unity that Jesus prayed for is far deeper than organizational structures. But it does not preclude us working together:

[T]he unity for which Christ prayed cannot be altogether relegated to an invisible, spiritual realm; it is to be so visible that it will be a witness to the world of Jesus’ divine origin. This means at least that the unity of the church means cordial, free fellowship and intercourse between diverse churches. The bond that binds all believers together – the person of Christ – is greater and stronger than the so-called denominational distinctives which become barriers to Christian fellowship and mutual love, they fracture the unity for which Christ prayed (319).

Not an outward appearance of sameness. But we value the mission of Christ so much that we are seen to be a community of redeemed people who cherish the gospel and love the church and are eager to labor for Christ’s kingdom.

There is one note of disunity in the Nehemiah passage, at Nehemiah 3:5: “And next to them the Tekoites repaired, but their nobles would not stoop to serve their Lord.”

True unity is based in the Gospel, the atonement first provided by the atonement of animals. See the flow of work through the chapter, beginning with Nehemiah 3:1: “Then Eliashib the high priest rose up with his brothers the priests, and they built the Sheep Gate. They consecrated it and set its doors.” And at the end, they tie in with the Sheep Gate again: verse 32: “And between the upper chamber of the corner and the Sheep Gate the goldsmiths and the merchants repaired.”

The building effort worked counter-clockwise. The Sheep Gate provided easy and regular access into the Temple for the animal sacrifices. In the rebuilding process, they started and ended with the Sheep Gate, and in doing so, they emphasized that they were a community that was built around the idea of “atonement”.

Unity comes only by atonement (“reconciliation by sacrifice”). It is our sin that has broken fellowship with the Lord and others. We enter the world as his enemies.

He notes that Tyndale probably coined the English word “at-one-ment”. The Sheep Gate pointed to the final sacrifice that was to come in Christ. See Hebrews 9: “Christ appeared as a high priest of the good things that have come, then through the greater and more perfect tent (not made with hands, that is, not of this creation) he entered once for all into the holy places, not by means of the blood of goats and calves but by means of his own blood, thus securing an eternal redemption”.

But now in Christ Jesus you who once were far off have been brought near by the blood of Christ. For he himself is our peace, who has made us both one and has broken down in his flesh the dividing wall of hostility by abolishing the law of commandments expressed in ordinances, that he might create in himself one new man in place of the two, so making peace, and might reconcile us both to God in one body through the cross, thereby killing the hostility. And he came and preached peace to you who were far off and peace to those who were near. For through him we both have access in one Spirit to the Father. So then you are no longer strangers and aliens, but you are fellow citizens with the saints and members of the household of God, built on the foundation of the apostles and prophets, Christ Jesus himself being the cornerstone, in whom the whole structure, being joined together, grows into a holy temple in the Lord. In him you also are being built together into a dwelling place for God by the Spirit.

One new man” in place of the two (Jews and Gentiles). One body through the cross, “killing the hostility”.

It is God who does the building. It is God who creates the unity, in the Gospel, in the blood atonement provided by Christ.

Without the Gospel, there is no reason to be together. But because of the Gospel, we are being built into a dwelling-place on earth by the Spirit. He uses our labor to unite us for the task.

"We are His workmanship," His poiema, His "poetry." If you've ever studied poetry, or struggled to write a poem, you understand the care God takes to "work all things together for good" in our lives. For this reason, and many others, I believe in the Sovereignty of God. I have seen His hand working in my life, and I submit myself to His merciful will, with all my being. View more posts

2 replies on “God unites his people for his purpose”